On the evening before Survak, a lot of dishes are served on the dinner table - bread, banitsa, meat, sarmi, klin with a coin in the middle (banitsa with rise, eggs, cheese, with homemade pastry), ushaf. That night is “greasy”. It is also called "dirty”. The dishes should always be an odd number- 3, 5, 7 or 9, the klin should be ceremonial , a special stamp is put on, which is called “prosphora”. When everyone gathers around the table, the youngest child says a prayer: “ Our Father”, and the oldest man says : “To be safe and sound, we're celebrating Survak again”, then he breaks the bread into halves. Everyone starts to eat. The coin is taken by the oldest man , but before that he spins the tray with the bread clockwise three times. First time he says: "Let us be safe and sound next year to celebrate Survak again.” , then he says: “Let the year be fruitful!.” On the third spinning he says: “Let all of us be safe and sound.” The bread isn't cut into slices . Everyone takes from it with a fork .

After everyone has had dinner, the men sit in front of the misal- a tablecloth. There are are three dishes on it – a loaf of bread, a klin and some sarmi. Cornel sticks are put into the klin in order to bring good fortune, as for health; long life; home; animals; work; wedding; children ; etc. The kids grab the tablecloth and carefully start dragging it. The men should have pennies to pay. One of them asks: “What are you dragging?” The kids answer: "We're dragging the new year.” The men throw some pennies, and the kids start to scuffle to collect them. Then the children drag the tablecloth for the second time. The men ask them again: "What are you dragging?” The kids answer:” We’re dragging fruitfulness! The men say: "Let the year be fruitful.” and throw some pennies again. The kids drag the tablecloth for the third time. The men again ask: "What are you dragging?”. This time the kids answer: “Long life and health.", and the men say: “Let us be safe and sound.” The throw some pennies again and the children scuffle for them. 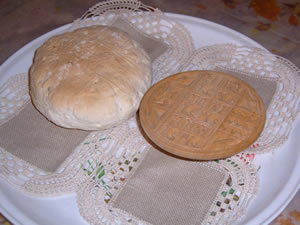 The next day the kids go out to do a ritual called “survakane"- tapping people's shoulders with "survachki”. Their "survachki” are handmade out of cornel tree twigs with a lot of buds, symbolizing fertility. There aren't paper decorations on the twig, they decorate them with dried fruit and colorful wool. Their ritual chants are: "Surva, health! May next year be healthier.” People give them money, apples or ushaf.

6th January- Epiphany (a christian celebration)
„Yordanov den” starts with a liturgy in the church. A procession with gonfalons and the Icon, which depicted the Baptism of Jesus Christ,  heads to the bridge, where the cross is thrown into the river- a symbol of the Baptism of Jesus in  Jordan River. Young men jump into the river and whoever of them gets the cross goes first to the priest. He is followed by the others. The priest sprinkles them with Holy water for health. The throwing of the cross is performed in different places every year.
The young men, who had jumped into the river for the cross, go from house to house, they carry the cross, which is kissed by everyone and they sprinkle the houses with Holy Water for health and fruitfulness. After that the owners of the house treat them to some food and leave money on the cross. Until around 1938 in “Vodici”  (6th January- Epiphany ) they performed the following ritual:
Some stones were collected from the place where the cross was thrown, later people go around  every house of  the town with these stones, with the words: “Just how the stones weight, your purse  may weigh, too.” The homeowner gave money to thеm ( they were only children). One small part of the collected money was for the children, the other was donated to the church.

Everyone gives each other martenistsi and people put them on with the wish for health. The martenitsa is a twisted white and red thread.

After the service in the church on “Sirni Zagovezni” day people visit their  parents or godparents or other older people to beg for forgiveness. They say: “I have made  some mistakes, I beg you to forgive me.” The one wishing for forgiveness gives a white boiled egg. They put it in the hand of the person they ask for forgiveness and they kiss it. In the evening people beg everyone for forgiveness, during the "Vecherinka”(a small prayer service), which precedes the liturgy,  the priest asks the laity for forgiveness, and after that they forgive to each other.

This is the „Kukeri” celebration in the town of Zlatograd. The date of this fiesta changes depending on Easter. This custom is performed on Sirni Zagovezni, when people perform the so called “Hamkane”. On this day (sunday) a “banitsa” must be cooked with a lot of cheese and butter. On a hook which is on the ceiling of the room, an egg and white halva are hanged there. Then they are swung and everyone starts  "hamkane", which means to try to catch the swinging egg and halva using your mouth only. After that the oldest member of the family fires the tread that is hanged from the ceiling. If the tread burns smoothly, it is thought that the upcoming year will be very fruitful, and the opposite. The same night, some boys and girls disguise themselves with homemade clothes. They slip on silk socks on their heads and swap their clothes for not being recognized. They visit their families and relatives, where they're given wine and rakia.
On the same day a horo is played on the churchyard, because people start to fast from then on and they are not allowed to play horo till the end of the Fast.

Todorovden
Todorovden is the first week after Sirni Zagovezni. On this day, all the people that have donkeys or horses, decorate them and bribg them to the church service. After the service, the people who are named Todor go around town with their donkeys and horses.